The bill is coming due for many homeowners on a type of loan that was widely popular in the run-up to the housing bust, causing a rise in delinquencies at banks.

More homeowners are missing payments on their home-equity lines of credit, or Helocs, a type of loan that allows borrowers to withdraw cash from their house to pay for renovations, college tuition or almost any other expense. These loans typically require interest-only payments for the first 10 years, but then principal payments kick in for the next 15 or 20 years.

The increased cost of the loan can become a strain for some borrowers. This is becoming an issue now because many borrowers signed up for Helocs in the run-up to the housing bust as home values kept rising. Roughly 840,000 Helocs taken out in 2006 are resetting this year, with principal payments on an additional nearly one million loans expected to hit in 2017.

Borrowers who signed up for Helocs in early 2006 were at least 30 days late on $2.8 billion of balances four months after principal payments kicked in this year, according to Equifax. That represents 4.4% of the balances on outstanding 2006 Helocs. Delinquencies were at 2.9% before the reset.

Resets can lead to payments jumping by hundreds, or in some cases thousands, of dollars a month. Consider a Heloc with a $100,000 balance and a 4.5% interest rate. It would have a $376 interest-only monthly payment, which would then rise to $632 when principal payments kick in, assuming a 20-year repayment period.

Large banks, including Bank of America Corp. , J.P. Morgan Chase & Co. and Citigroup Inc., reported higher Heloc delinquencies in the second quarter, according to securities filings this month. Unlike with most mortgages, Helocs are primarily held on banks’ books, which means lenders are generally more exposed to losses when the loans don’t get repaid.

Worsening Heloc performance underscores that banks aren’t completely past all the problems sown in the run-up to the housing bust. While delinquencies on mortgages used to purchase or refinance homes have dropped substantially in recent years, Heloc delinquencies are rising and some large banks are warning of the risk of more to come.

Despite this, banks have been ramping up new originations, extending the largest dollar amount of credit lines in 2015 since 2007. This time around, the borrowers getting approved have high credit scores and at least 10% to 15% equity in their homes in most cases.

Some banks have taken additional steps to lessen risk. Wells Fargo & Co. and Bank of America no longer permit interest-only payments on new Helocs given to most borrowers.

While delinquencies for Helocs are rising, charge-offs are also up. Lenders wrote off 1.4% of defaulted balances from 2006 Helocs so far this year, up slightly from a year prior, according to Equifax.

Heloc delinquencies are unlikely to spur broader banking problems. It is generally harder to foreclose on a home, for example, if borrowers are paying their primary mortgage on time. Heloc balances, while rising, are small—averaging $55,400 for those resetting this year—compared with regular mortgages.

An improving housing market could also help limit defaults. As home values rise, more borrowers have the equity to refinance their Heloc with a new one, effectively starting the interest-only period from the beginning. Or some borrowers would be able to roll both their first mortgage and Heloc into a refinance mortgage.

Still, borrowers with a mortgage and a Heloc are at greater risk of owing more on their home than it is worth. Only 6% of homes with one mortgage are underwater, compared with 17% of homes with two mortgages, according to mortgage-data firm CoreLogic Inc.

As the bulk of precrisis Helocs starts to reset, the dollar amount of unpaid balances is increasing at many banks.

Bank of America, the largest home-equity lender by volume, reported $250 million of Helocs that had transitioned to requiring principal payments were at least 30 days delinquent in the second quarter, up 56% from a year prior, according to company filings. The bank says that accounts for just 2% of Heloc balances that are in repayment.

At J.P. Morgan, $647 million of Helocs that reset were behind on payments in the second quarter, up 21% from a year prior, according to company filings. A spokeswoman said the bank gets in touch with borrowers before Helocs reset to help them prepare for the change and offers modifications to eligible borrowers.

At Citigroup, delinquent balances totaled $338 million in the second quarter, up 105% from a year prior. The bank declined to comment.

Concerns around Heloc repayments were largely ignored during the peak of the financial crisis. Most banks focused on addressing defaults on primary mortgages—and most Helocs only required minimum payments then.

“Home-equity loans got pushed on the back burner—we’re being forced to deal more with that now,” said Guy Cecala, publisher of Inside Mortgage Finance.

The Office of the Comptroller of the Currency has been pushing banks to modify Helocs for borrowers who have trouble keeping up with payments, in an attempt to avoid another wave of home-related defaults. Those modifications include extending repayment periods and lowering interest rates to reduce monthly required payments.

Another headwind for Helocs could also be on the way: Most Helocs have variable interest rates that move in tandem with rates set by the Federal Reserve. A rising-rate environment would push up monthly loan payments further, a risk Citigroup warned of in a company filing this month. 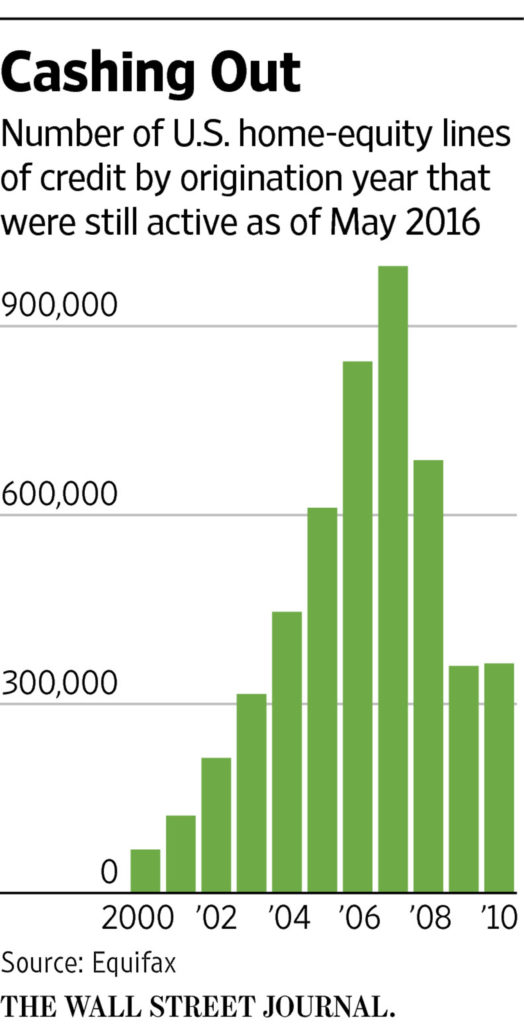