It’s a tough time for buyers—not enough homes on the market, and prices just keep on rising (those things are not unrelated). But despite the frustrations, 2016 was the best year in a decade for existing home sales, according to the most recent National Association of Realtors® report.

Last year saw a whopping 5.45 million sales of previously lived-in residences—the highest since 2006, when 6.48 million existing homes were purchased. Realtor.com® looked at the seasonally adjusted numbers, which are smoothed out over a 12-month period to compensate for seasonal fluctuations.

“We are continuing the recovery [from the housing bust]. Incomes have been going up. Wages are starting to go up,” says realtor.com Senior Economist Joe Kirchner. “People are saying, ‘A-ha, now I can afford a home.’ That’s why 2016 was a tremendous year.”

However, December sales dropped about 2.8% from November, according to the seasonally adjusted numbers in the report. They were up 0.7% from December 2015.

The slowdown in December is likely because so many buyers rushed in November to lock in historically low mortgage rates before they climbed, says Kirchner. Many of those buyers otherwise would have become homeowners in December.

The median price for an existing home was $232,200 in December—a 0.9% price reduction from November. But that was 4% more than a year ago, making December the 58th month in a row that year-over-year prices were up. (Sorry, buyers.)

A shortage of homes for sale in many areas, plus climbing rents, home prices, and mortgage rates mean “it’s not getting any easier to be a first-time buyer,” NAR’s Chief Economist Lawrence Yun said in a statement. “It’ll take more [starter homes hitting the market], continued job gains, and even stronger wage growth for first-timers to make up a greater share of the market.”

In December, home sales fell the most in the Northeast, dropping 4.5% from November, according to the report. But they were still 3.2.% higher compared with a year earlier. The median home price in the region was $243,300. That’s down 5.6% from a year earlier.

In the West, the number of homes sold dropped 1.9% from November and were down 0.9% year-over-year. That’s not exactly surprising, as home prices are also the most expensive in the region, hitting a median $345,400 in December. That’s a 6.3% annual rise. 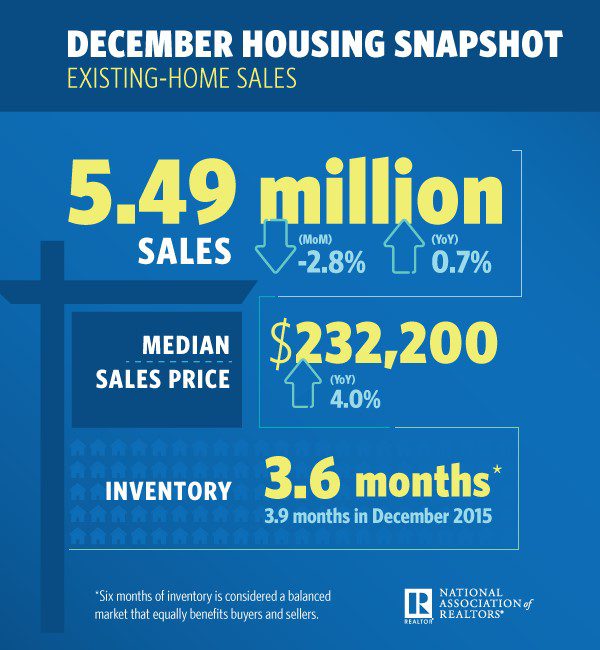 The post It’s Official: 2016 Was The Best Year for Existing Home Sales in a Decade appeared first on Real Estate News & Advice | realtor.com®.