Median household income in the San Francisco metro area in 2016 was $96,667, just ahead of the $95,843 figure for the Washington region, the Census Bureau announced Thursday. That put the California hotspot in first place among the 25 most populous metro areas, with the capital falling to the No. 2 slot.

The median income for the San Francisco area, including nearby cities such as Oakland and Berkeley, has surged in recent years amid a tech-sector boom and jumped 9.2% in 2016. Incomes in the Washington area, including parts of Maryland and northern Virginia, rose a more modest 2.7% from 2015. 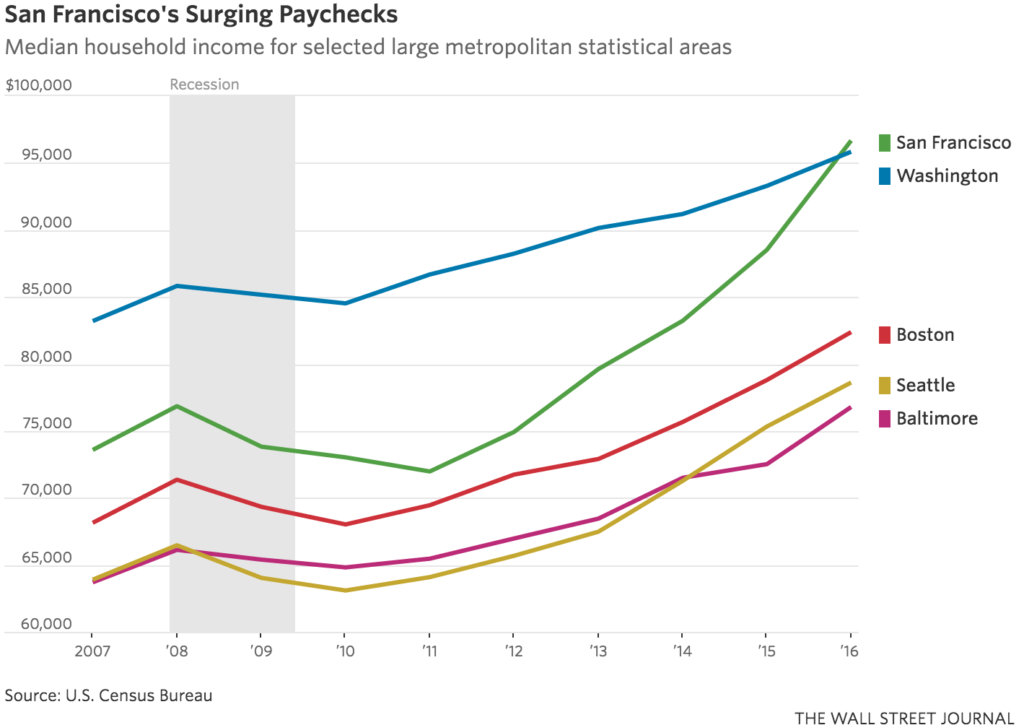 For years, Washington and San Francisco have topped the income chart among the biggest 25 metro areas, a testament to the high-paying jobs surrounding the federal government and the tech industry. (Those areas also tend to have higher costs of living.) Rounding out the top five in terms of income last year were Boston, Seattle and Baltimore.

San Francisco also had a higher household median income than Washington back in the 2000 census, near the end of the dot-com bubble.

The San Jose, Calif., metro area–home to Silicon Valley–remained in the No. 1 spot last year when looking more broadly at all metropolitan areas.

The bureau on Thursday released state and local data for 2016 from its American Community Survey, a massive undertaking that seeks detailed information from about 3.5 million households each year. In a separate report on Tuesday, the agency announced that the U.S. median household income was $59,039 in 2016, up an inflation-adjusted 3.2% from a year earlier on top of a 5.2% gain in 2015.